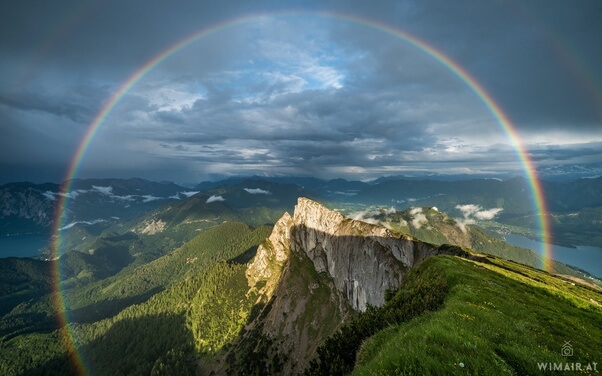 If the night sky can boast of twinkling stars and a full moon, the morning skies can boast of rainbows. As a child I do remember looking with awe at the rainbow; meaning to decipher its mysterious charm. Though there definitely is a scientific reason or all-natural events, yet nature has a subtle way of giving psychic hints via its elements. One of the most occasional hints is the occurrence of rainbows. Rainbows have long been the center of discussion among mystics and psychics all around the world. This piece of the blog is specially dedicated to the spiritual meaning of rainbow and rainbows spiritual signs. So,

What does a rainbow mean?

In the ancient Asian culture, seeing a rainbow meaning there has a lot that can be said about it. Rainbows’ spiritual signs are strongly believed and followed in ancient Chinese culture. A rainbow occurring during a wedding can reflect a perfect union of yin and yang. However, it is believed that the skies split so that the heavenly can come down to earth or the heavenly spirits trapped in the earth can go travel back to their heavenly abode.

It is then that the mother goddess, Nuwa places stones of five different colors and seals the split that forms the gateway between the Gods and humanity. On the contrary, the Irish believe that not only are they beautiful but seeing rainbows good luck to the onlooker. It is believed that the rainbow ends at a point that contains treasures of the ancient world. A treasure that will never deplete and will bring endless riches to the one who finds it. But, the catch here is, thee treasure is being guarded by a naughty leprechaun who can pull the trickiest of tricks on you and deceive you from reaching that treasure.

In cultures such as the Hindu culture and the Islamic culture, the rainbow meaning spiritually is considered to be the bow of the Gods. The Hindu God Indra uses the rainbow as his bow and the lightning as his arrows to shower rain on the earth. It is said that he has the power to revive barren land and bless fertility to any soil. The Hindus also believe in the rainbow symbolism of unity.

Rainbow symbolism is also widely accepted as the union of two soulmates who have been torn apart in some lifetime. In many parts of the world, people also believe that a rainbow is a bridge that connects heaven to earth and fairies descend to earth via this bridge. Sailors often say that a rainbow over your head signifies prosperity and transformation.

In certain cultures, it is also believed that if you cross a rainbow, your mind shall change genders, if you are a male, you shall have feminine thoughts and vice versa. Many also say that rainbows are a gateway to another realm. A thin veil exists where a rainbow is formed. Crossing this veil shall take you to another realm.

Anyone witnessing such an event should take it as a symbol that they are being chosen to lead humanity through tough times. Double Rainbow meaning spiritually can also be considered as a sign from the universe to take up a lead in your spiritual journey. It’s an indicator that you are born to do greater things and the spiritual realm is awaiting you to discover yourself.

But not everywhere does the rainbow receive a warm welcome with open arms. In certain parts of western culture, the rainbow in early mornings is a bad omen and a harbinger of bad luck. Many families do not let their children experience the mystical beauty of the rainbow, in fear that witnessing one or pointing towards one might bring them diseases and bad luck.

It has been stated in ancient myths that people who have been touched by rainbows have turned into half-demons and slain several on their ways. They have forgotten their near and dear ones and even harmed people coming their way. Also check how Double Rainbow occurs.

Whether these are true or not, nobody can deny the mystic beauty that surrounds rainbows and the spiritual connection that it has to human life.

Also Check our article on:

What is Your Higher Self?

Ways to Detach Yourself from Your Manifestation Outcome

Read More
17 shares
Bob is on sabbatical leave and is unable to respond to messages or take on new clients at this time.