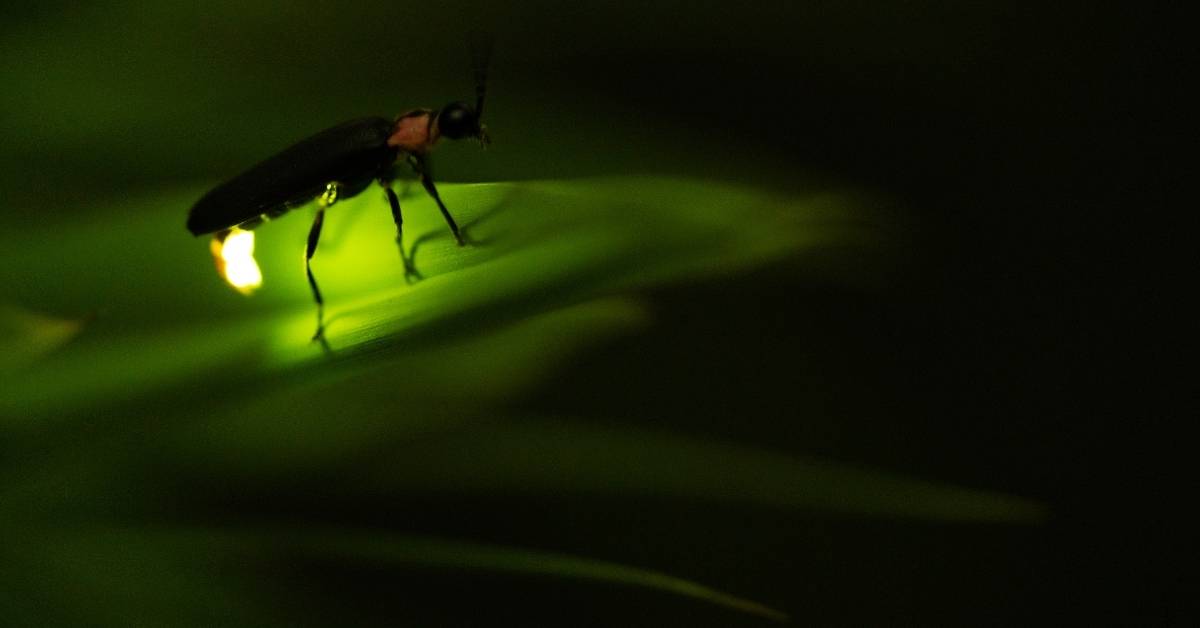 There are over 2,000 species of fireflies or lightning bugs. Although they are called flies or bugs, they are neither; they are beetles. They are easily spotted by the light that is produced in the belly area. Their anatomy matches any other beetle with a pair of hardened wing cases that fold underneath and called elytra. When we think of light, we imagine a fire, but this bioluminescence comes from within the beetle and produces no heat. Many creatures have biological characteristics that are designed to attract mates or prey. This winged beetle has a flashing light to serve this purpose. Generally, the males of the species initiate the flashing as a signal to attract the females. If the female develops a liking towards the flashing pattern of the male, she responds in her specific pattern, and they mate. The flashing pattern differs from species to species. There also are some species that use pheromones as their mating signal instead of flashing. In spirituality, an inner light stands for enlightenment, and the firefly is a shining example of this miracle. Thus, there is a spiritual meaning of fireflies that we can learn from.

There are no infrared or ultraviolet frequencies in the light that is produced by the firefly. Fireflies produce a “blue light”, symbolic of wisdom, inspiration, and healing, a gift from the gods. What better way to compare an inner glow of the heavenly spirit than with this small insect’s miraculous light? Fireflies are not only a mesmerizing sight but also use their light to attract what they desire. They teach us that we need to let our inner light glow and attract the vibe and tribe. They also symbolize the importance and benefits of being visible. Fireflies are the living example that proves that if you want something to happen, you need to show the universe what you want and let the universe get the things you desire to be guided towards you. This is thus a very strong motivator as a spiritual meaning of fireflies.

The Magic of Believing

It can be almost impossible to believe in that which one cannot see. An inner spirit is not able to be physically manifested but is present, just the same. The firefly acts as a metaphor for that little light that shines in all of us if we just believe. They narrate a beautiful story that everything can come true if one truly believes in it and put all your positivity and heart into it. Putting all our heart and emotion into something that is not quite visible in any form can be a tough task. As hard as it may be to believe in a Higher Power, it can also be difficult to believe in a light manufactured from internal organs. The universe works in mysterious ways, and what better example can there be other than the fireflies? There is no other living organism with such beautiful character of being able to glow. There is no manmade source to justify its intense light, just a creation from God that abounds with higher wisdom than mankind.

Fireflies are said to be kindred spirits. Kindred spirit means that they align with what you truly desire to become a part of your reality. The spiritual meaning of fireflies is beautiful too. They enter your life to add happiness and chase the darkness out of it as they carry light with themselves. They reflect their glow in one’s life, and that brings a lot of good with it. Fireflies make your life easier and make your path lighter. Believers believe that fireflies inspire and empower people to radiate the beauty and grace that is within themselves. The kindred spirit of firefly fires up your deeply buried passion and makes it glow. They leave a positive impact on the individuals and their surroundings as well.

Scientists may be able to explain the chemical makeup that produces a firefly’s inner glow, but how it was created will always remain a mystery to those that seek a material answer in nature. Believing in the unknown and the good intentions of a superior being is shown to us in many subtle ways. The firefly is a good example of the unseen presence that exists within all of us. This is a spiritual gift that offers the wisdom of knowledge. The next time you see a firefly as the day turns to dusk, think of how you can increase your spiritual abundance. The Universe provides abundantly for those that believe in an infinite flow of resources and race from the higher consciousness. It is only a matter of getting down to aligning yourself to its ways and means with faith, perseverance, and a never-say-die attitude. Success WILL be yours.

We hope you enjoyed reading about the spiritual meaning of fireflies.

How to Make Someone Fall in Love with You

The Power of Prayer

Read More
172 shares
Bob is on sabbatical leave and is unable to respond to messages or take on new clients at this time.